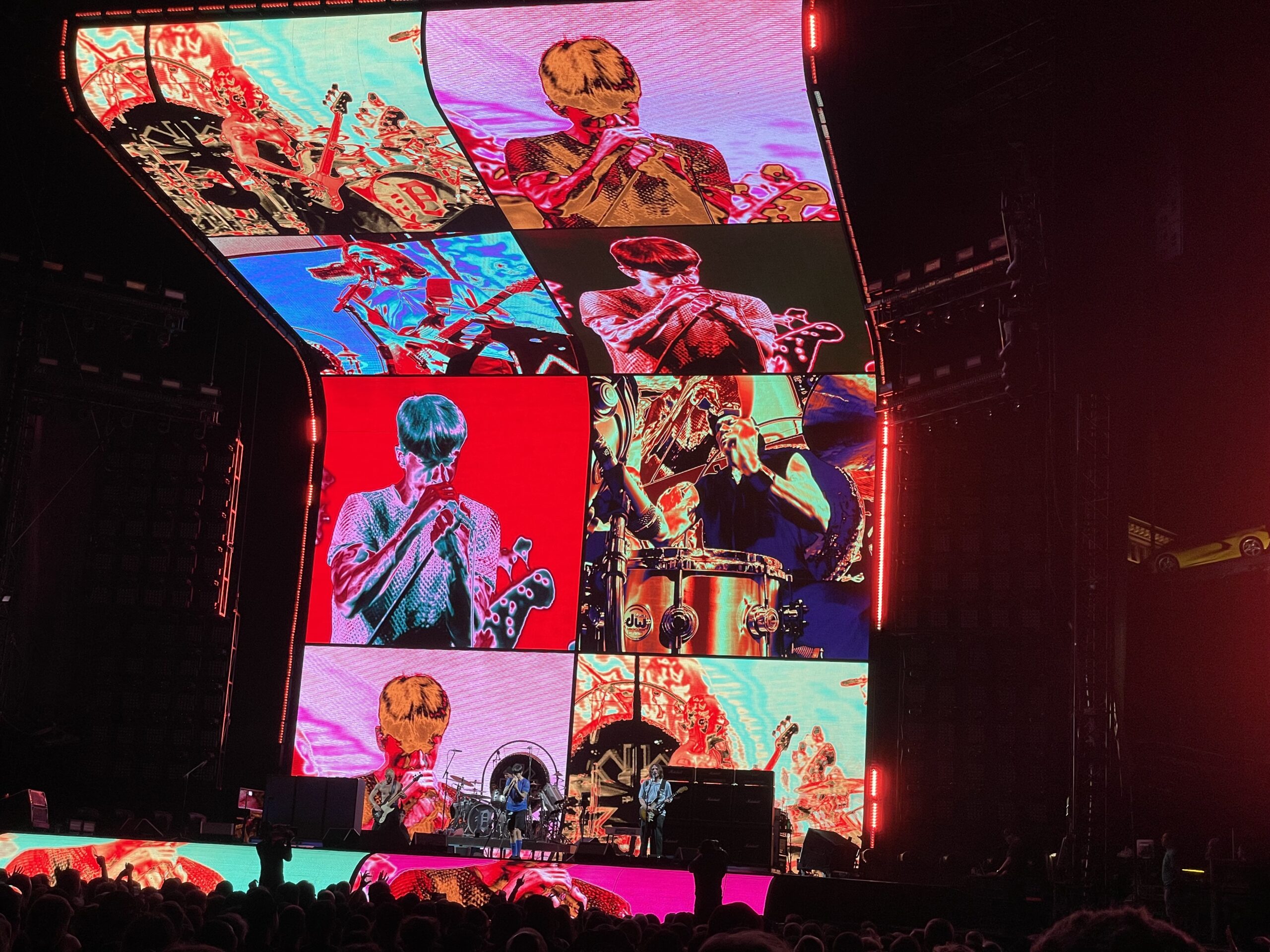 This is the first large stadium show I’ve been to since before the Pandemic. To be honest, we usually don’t go to the biggest shows anymore as we’ve seen the acts in other venues or just don’t want to deal with the crowds. This event was a blast and totally worth being around so many other folks… and believe me, there were alot of people there.

There were 8 sections on the Comerica Park field, plus a pit area, then behind us on all sides (except the Detroit Athletic Club facing center field). I mean they had each section full, plus the entire upper deck also looked pack. Our seats were on the main floor, aka the middle of the baseball field. Section DD, row 13, seats 34 & 35. Our neighbors met us down there for the fun.

The opener, Thundercat, something else on the bass, jazz and funk sounds. It was a serious on slaught of notes from the minute he took the stage. I’m not sure how many people were into him or even paid attention. But I was riveted. I first heard him on NPR Tiny Desk with Mac Miller (RIP). I really didn’t know what the big deal was when Mac introduced him, except to say the quality of the songs he was working on with Mac were of another earthly plane. Then I started digging into his other music and found it to have a smooth silky high falsetto voice and a fast undulating bass that had a feeling of the old funk disco. I recommend checking out his songs like Funny Thing and Them Changes which he performed on Steven Colbert with Jon Batiste. I’ll be looking out to hear him again in the future, just hopefully not in such a big space.

The second act was the Strokes, featuing Julian Casablancas on lead vocals and other players that are all his childhood friends. Super cool to think that he collected musicians along his life journey that would eventually lead to his super famous grammy award winning band I’m never quite sure how this band got to be so popular as it’s a bit ‘Last Night’ sounding to me over their entire music catalog. I did enjoy hearing them. We stayed on the main floor for the first 4 songs, but the volume was intense and I needed to pee, so we hit the lounge, aka the Tiger Den.

Just at the last two numbers, we headed back down to our “seats”. I use the term seats lightly, cause really, there wasn’t any sitting happening. Honestly, how could ya? When the music started to indicate RHCP (Red Hot Chili Peppers) were taking the stage, it was pretty electric. Everyone was out of their seats and breathing in anticipation. For those of you not from Michigan/Detroit, Chad Smith, the drummer is somewhat of an icon in our area. The local boy with a really popular Detroit band (Toby Redd), takes off to Los Angeles, connects with another Michigan boy, Anthony Kiedis, from Grand Rapids and makes one of the most popular bands of the 1990’s and beyond.

Seriously, these guys not only created great hits like “Give it Away“, “Under the Bridge“, and “By the Way“, but they survived the 90’s.

Think about how many of their grunge peers from the 90’s have already left this plane and moved on to the next. Kurt Cobain (Nirvana), Shannon Hoon (Blind Melon), Chris Cornell (Soundgarden), and Andrew Patrick Wood (Mother Love Bone), are those major players of the 1990’s grunge sound to have passed on.

These are some of the most iconic acts of their time.

Now maybe the RHCP’s would say they aren’t that kind of band (grunge, alternative, etc). But they are from that era and for me, they speak to my inner Doc Martin Flannel wearing self.

You can check out their playlist on Setlist.fm if you’re intereseted in hearing which songs you missed out on. I’m just glad we went and equally as glad we made it home safe. Never know these days with what’s going on in the world.