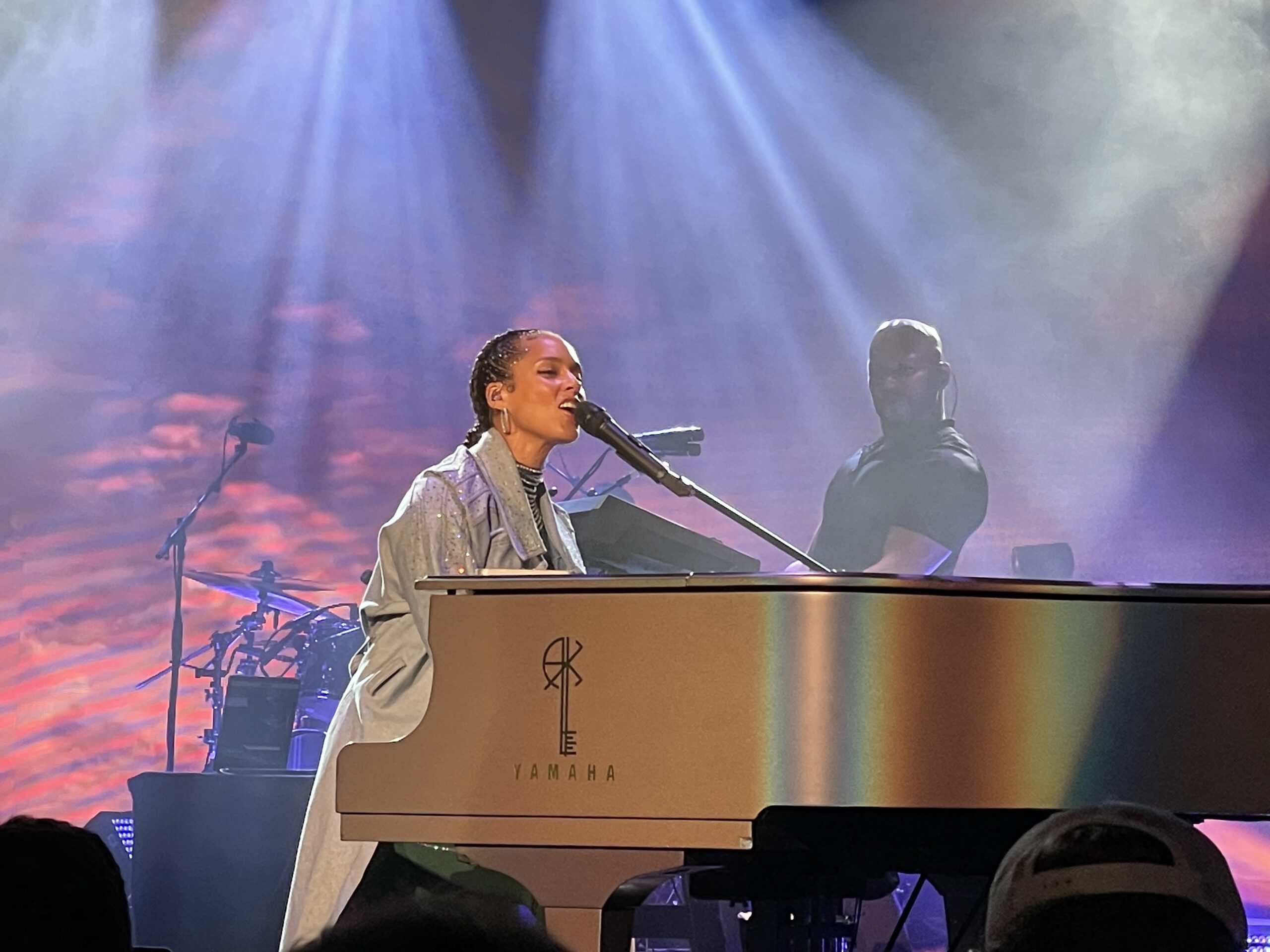 Freedom Hill is the smaller outdoor park in Sterling Heights, or maybe that’s Utica out there in the Metro Detroit Suburbs. It’s off Big Beaver, aka 16 mile road and they have a large gravel parking area behind the venue that wraps around for acres. Of course, we have to park our cars somewhere. Interesting situation about this show is we had some VIP parking and lounge access attached out our seats. Row DDD section 200, which happens to be about four rows off the front of the stage.

Alicia Keys, apologies to the opener, I rarely miss them, but last night we had family from Florida with us and it was more important to visit than listen to a new band. Anyway, about Alicia Keys, that women some folks know from the Voice television program, then there are the rest of us. Back in the middle late 1990’s, Clive Davis introduced us to a new woman on vocals and piano who had some soulful intentions that would remind me of Aretha Franklin.

Ten records after Songs in A Minor and we’re all still singing along. Her melodies are soaring the words are uplifting anthems that are key to our survival. When she sings about New York’s concrete jungle streets, you are there walking them with her. Everyone knew when she broke “Fallin’” that we were also falling in and out of love with her lover too. So many women knew what she meant, we were going to be there through the end.

I remember watching her on tv with less make up and thought damn, that shit is brave. Everyone thinks we all need to be fully clowned up in order to be beautiful and there she was on internationally syndicated television with a light coating of foundation and mascara. I’m sure that in the dressing room there was more preparation for her face than I am eluding to, but when she was on camera against her peers and the other singers on the show, she looked fresh and dewy. Last night, same thing fresh dewy face with enough Swarovski crystals in her hair and on her trench coat to make all the girls jealous. She shined bright like a diamond, but that’s a whole different singer.

I really enjoyed the show. Fourth row is a bad ass place to sit, we really loved being so close. Except for the damn volume, I sound like an old person, but those big speakers are like being in an abusive relationship. The subwoofers pump your chest and the treble beats in your ears. If you are not bringing ear plugs to any show, you are doing permanent hearing damage. I believe if you are hearing sounds over 110 decibels, for longer than 10 or 15 minutes, you are doing irreparable damage. Since we go to so many performances, both ones that we put on and by other famous artists with more powerful sound systems, I a huge proponent of plugging up your shit. For cheap plugs, consider these, but if you go as frequently as we do, you might want to invest in something more for listening to music.

As always, you can check out a more respected writer like Gary Graff (but I think he was at Pine Knob for Alice In Chains last night), and the song list from each performers show is out at Setlist.fm. I hope that you, dear reader, find some time to listen to some live music this summer while it’s still nice weather.